Posted by resumegrabber on May 19, 2009
Twitter is a free social networking and micro-blogging service that allows the user to post 140-character tweets (Twitter updates) and display 160-character bios (User profile) in his/her Twitter account. Although the tweets are restricted to 140 characters, the viral effect of Twitter helps the users to convey the messages to hundreds and thousands of Twitter followers in no time.

Twitter has quickly reached millions of users and it has grown tremendously over the past couple of years. It has grown at a staggering rate of 1382% as of February 2009 (YOY) and is competing with the leading social networking giants like Facebook and MySpace.

Twitter is gaining more popularity and its user base is rapidly increasing on a daily basis. A lot of Twitter-based tools, widgets, and services are now available. Twitter is being used in information gathering, networking, businesses, advertising, corporate branding, recruiting and in a lot of other areas as well.

The recruiting and staffing industry has realized the potential of Twitter and using it as a recruiting tool. Recruiters and employers have started to post job openings in Twitter. Also, the recruiters are using Twitter to identify active as well as passive candidates.

For example, to search for profiles of "Sales Manger" in twitter, here is a simple Google search script: 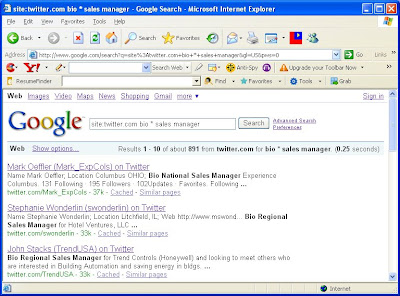 You can also search twitter profiles in the below websites

Resume screening is a time-consuming process that involves a lot of manual effort. Using software for screening resumes reduces the time and effort. This can also save money, as extra manpower required is cut down. When resume screening is done by a software, the personal bias is avoided. The software treats all the resumes the same while searching for given information. The automatic filtering, sorting and saving resumes provides the competitive edge of quick retrieval of required information. On the other hand, there is a chance of missing a potential candidate just because the given keyword is not found in the person’s resume. The software is limited to do in the way it has been programmed. A personal approach to the style of the resume will be missing in this system. Moreover, a computer savvy person, who knows how exactly the software searches for information, can provide all the keywords appropriately in the resume and easily get it screened by the software.

Source:eGrabberNewsletter I use the Internet to search for resumes of passive candidates. But my searches often return a number of irrelevant and unwanted results, which is frustrating and time-consuming. Is there a way I could zero in on the relevant resumes without having to be a search engine expert? ResumeGrabber is specifically designed to assist recruiters who search for resumes on the Internet. Simply enter your keywords (such as Java programmers) and ResumeGrabber will use the power of search engines (Google, Yahoo, Bing, etc.) to search matching resumes from -     Internet Communities such as GeoCities, Angelfire, etc. -     Social Networking Sites -     Free resume sites including Craigslist and many others -     Largest ISP’s such as ATT, Earthlink, AOL and others -     Popular blog hosts such as bloggers.com, etc => Find business email address and phone number for each profile => Export them to an ATS or Excel. This way, you get an actionable, ready